The future of thematic mapping?

Several people have sent me this population map, made by Brandon Martin-Anderson, which represents one dot for each person counted in the 2010 U.S. Census. The link takes you to an interactive and zoomable version that illustrates the broad and specific patterns of settlement. 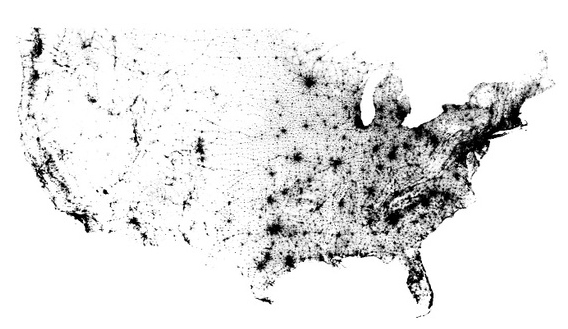 When I first came across the map, I didn’t pay much attention. I mistakenly assumed that it was just one more of the many thematic maps that have become altogether routine in the past few years. But Michael Buehler of Boston Rare Maps drew my attention to its importance: it is in fact the opposite of most thematic maps, which are premised on some measurement of statistical data, represented as a layer of information.

Most population maps made in thelast two centuries began by establishing a system of data representation, such as the use of shading to indicate density per square mile, or the use of scaled circles to depict the relative size of cities. For example, here is the earliest map I have found of the American population, made by a German in 1855 based on the 1850 Census. The map was made by August Petermann, who sought to depict the number of whites and free blacks per German square mile (an antiquated form of measurement, about 31 times the size of a U.S. square mile). 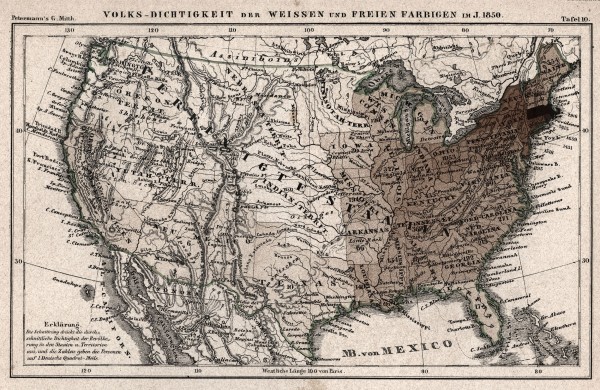 Here Petermann was translating statistical data into visual form. Thus he needed to explain how his visual technique represented the system of measurement. Each state is shaded according to its relative population density per [German] square mile; the number on each state represents the statewide average of that figure. 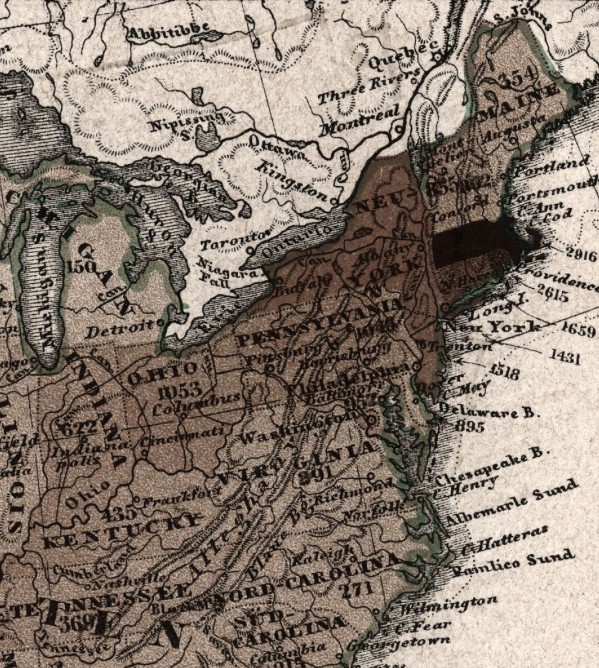 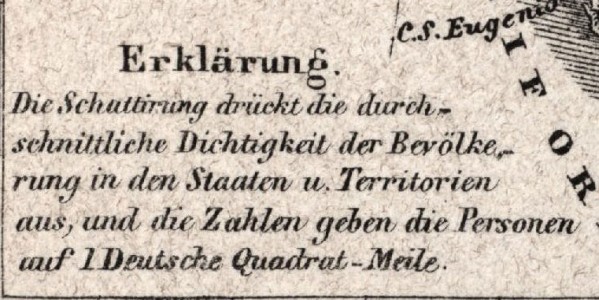 By contrast, the new 2012 census dot map represents raw data: each person is simply marked as a single dot, and the aggregation of those dots becomes the overall technique of representation. In this respect the interactive map depicts the population as an element of the natural landscape, not really different from the presence of a river or a street. In other words, there is no intermediate step of measurement in the technique of representation. Perhaps my lack of cartographic training is showing here — no doubt all maps are abstractions of one kind or another. But I’m intrigued by what modern technology (here the ability to zoom in) means for the ability to think anew about mapping information.

I welcome your input on the concept behind this map, and thematic mapping generally. Special thanks to Michael Buehler for alerting me to the unique quality of this map.

UPDATE: I thank John Cloud and Chris Lane for discussing the details of the dot map with me and pointing out my errors of interpretation. As they both observed, the recent census map is not fundamentally different from Petermann’s early attempt to map the population. The new map seemed to me to present data differently, with the dot symbolizing the individual rather than a scale of measurement. But as Chris Lane points out, it is not a conceptual departure from previous maps that came prior. Still, I welcome your comments on the new map, and what we can learn from this technique of population mapping.

2 Responses to “The future of thematic mapping?”