This week the University of Denver will open an exhibit of pictorial maps drawn from the private collection of Wes Brown. The exhibit is curated by Rebecca Macey, and located in the Anderson Academic Commons, in the heart of campus, just one of the many events related to “Map Month!” 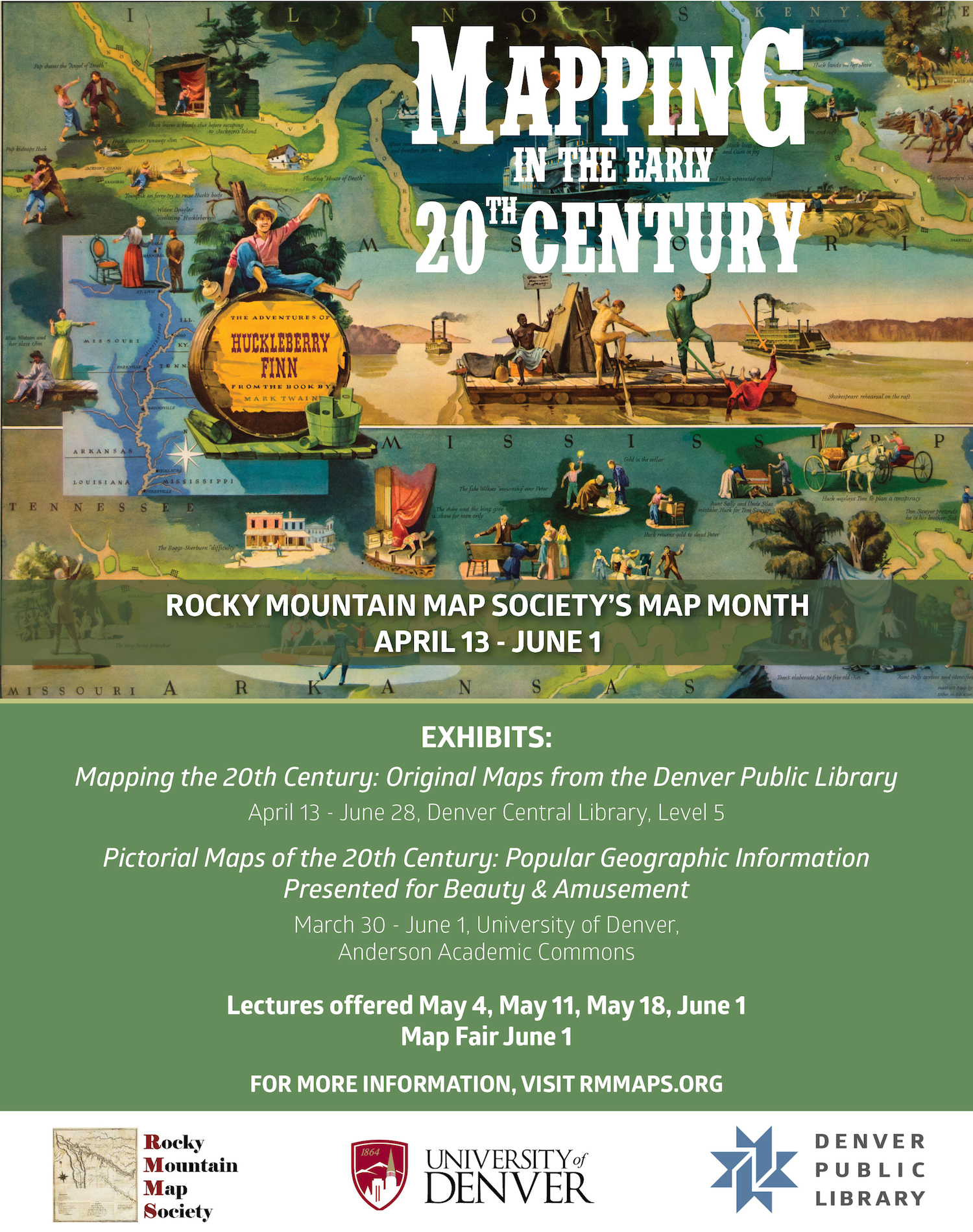 What is a “pictorial map?” The term has come to include a wide range of maps, but the genre particularly refers to the maps associated with tourism, advertising, literature, and illustration that really peaked as an art form in the middle decades of the twentieth century. Among the most stunning examples is Lucien Boucher’s 1947 promotional map for Air France. 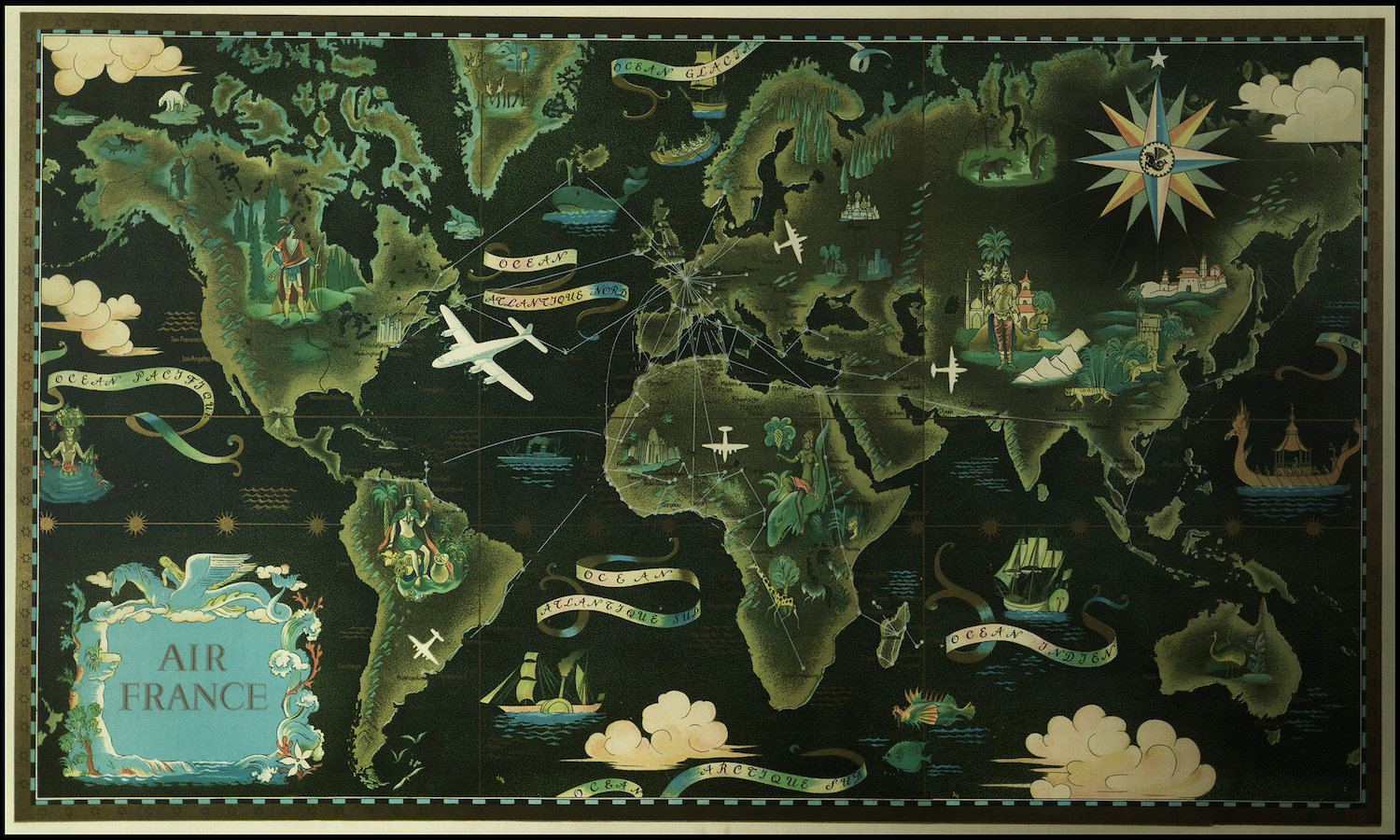 In the immediate aftermath of World War Two, passenger air travel spread quickly as the airlines developed routes around the world. Air France mounted a dramatic visual advertising campaign to draw potential passengers into this exciting new world of aviation. Here Boucher draws a world of movement. Lines mark the extensive route map, while the muted backdrop of ancient ships and romanticized natives conjure up the “exotic” dimensions of world travel. 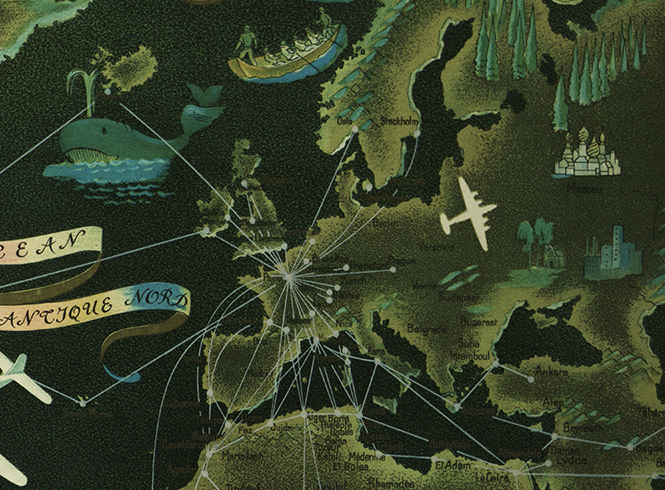 Boucher’s maps were particularly notable for their subtle design and color. 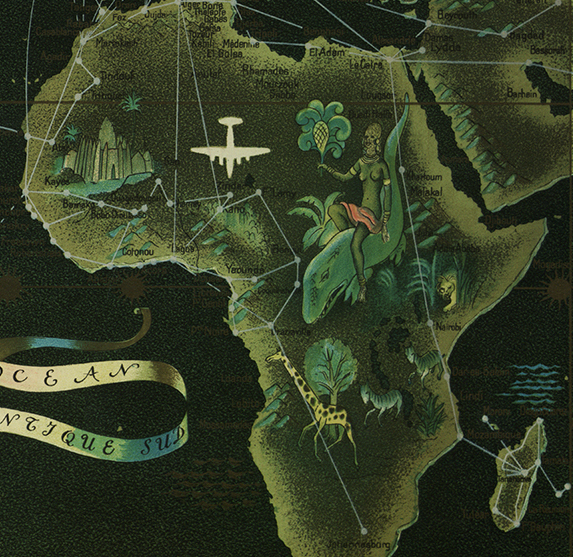 Part of what’s interesting about pictorial maps is the question of scale and representation. Some of the maps deliberately exaggerate or reject scale in order to make geography intuitive, or to make a pointed comment. Think of the “View from 9th Avenue,” Saul Steinberg’s famous cover of The New Yorker from 1976 (and courtesy of David Rumsey).

Steinberg’s iconic image had precedent in Daniel Wallingford’s similar commentary, “A New Yorker’s Idea of the United States,” drawn in 1936 and then reissued for the World’s Fair in 1939. 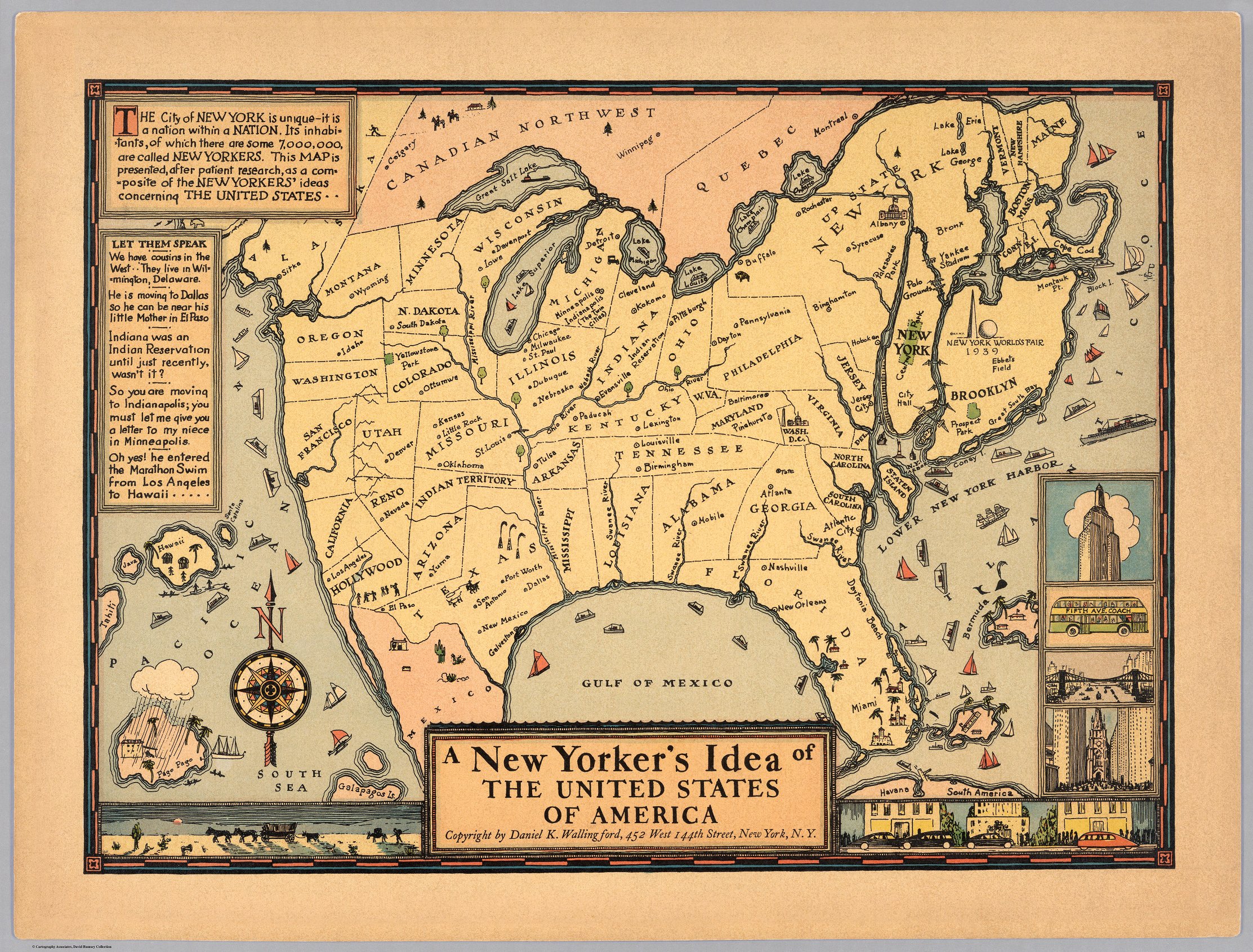 In Wallingford’s rendering, the Mississippi River flows through Colorado, Dubuque is in Illinois, and Nashville in the Florida Panhandle. The geographic myopia of New Yorker’s was itself the subject of the map. In an even earlier experiment, Wallingford rendered the country from the view of Boston, equally parochial. But even earlier than Wallingford, John T. McCutcheon used the pages of the Chicago Tribune to satirize “The New Yorker’s Idea of the Map of the United States” (1922). 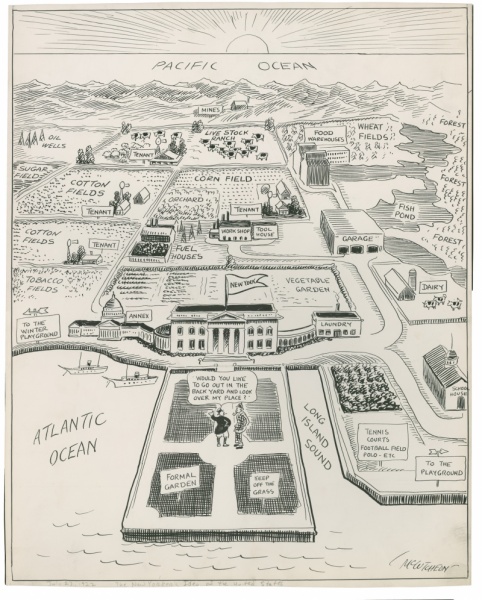 Not all pictorial maps were unrealistic depictions of geography, however. In fact one of the most alluring in the DU exhibit is Hal Shelton, whose extraordinary renderings of topography won him an active and devoted following in the map world. 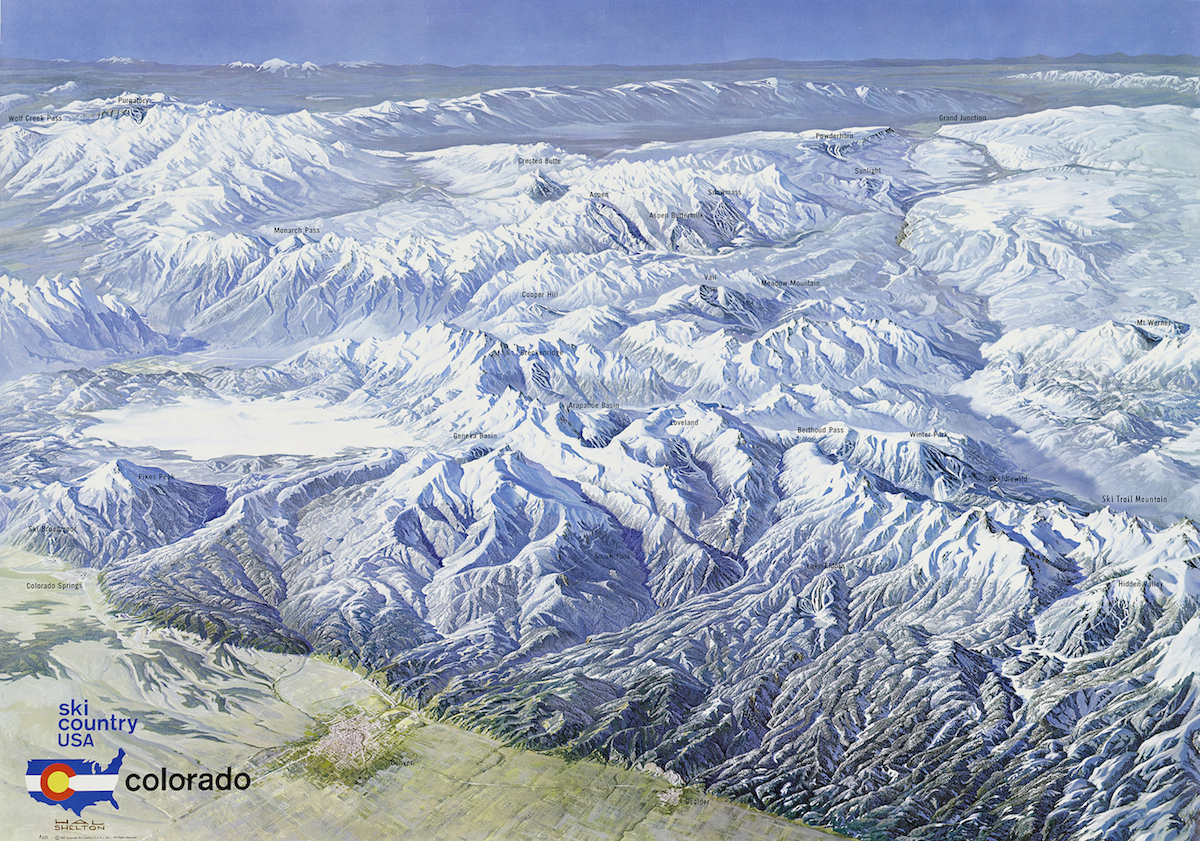 Shelton was known for his groundbreaking cartography both at the Geological Survey and with Jeppesen Aviation. What is most remarkable is that Shelton was able to convey the landscape in a way that was both faithful and complex on the one hand and pictorial and accessible on the other. Here he brings that style to the emerging ski industry in the Colorado high country in the middle of the twentieth century, just as that region was moving from a mining culture toward one primarily centered around tourism.

A closer look reveals Shelton’s fidelity to the terrain, nearly approximating a photograph, yet one from an impossible, imagined point of view. 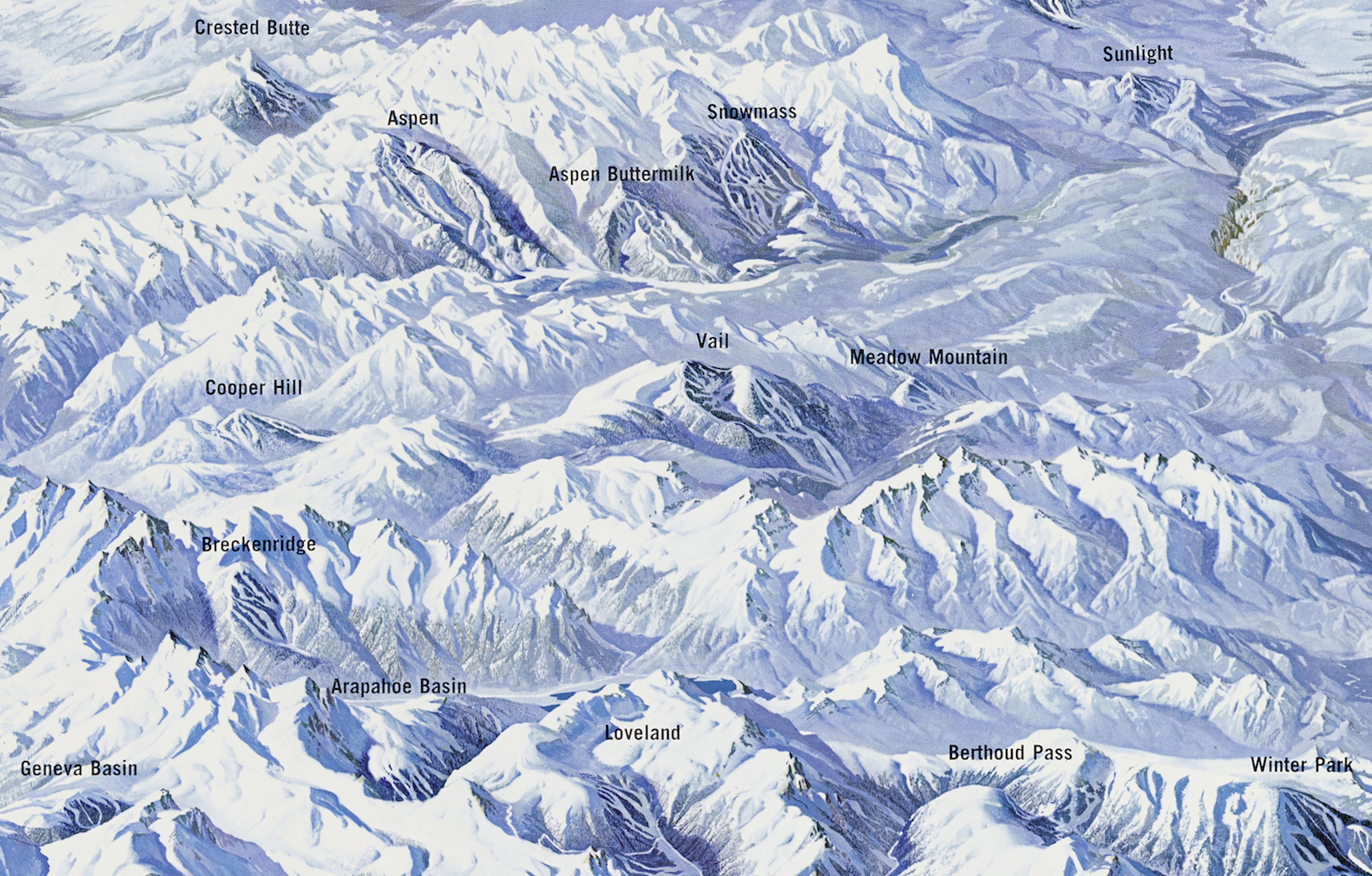 For those with an appetite for more, David Rumsey has amassed an enormous collection of pictorial maps, most of them digitized and available on his website. His curators have taken special care to identify the leading practitioners of the art, which is in itself a feat of research.

Many thanks to Wes Brown and Rebecca Macey for investing so much into this exhibit.