Mapping the threat of slavery, in German!

In early January I had the privilege of visiting the map collection of “PJ” Mode in New York City. PJ has acquired hundreds of maps around the theme of persuasive cartography. The collection includes a range of items that might be described as propagandistic, allegorical, or suggestive.

PJ is familiar with my work, and wrote a generous review of Mapping the Nation in The Portolan. His knowledge of the historical context around his collection is considerable, and I came away with a much deeper sense of the ways that cartography can be deployed for a particular purpose, whether explicitly or implicitly.

One of the most intriguing items he showed me was this map from 1856, included in a German-language pamphlet designed to foster support for the Republican presidential campaign of John Fremont. 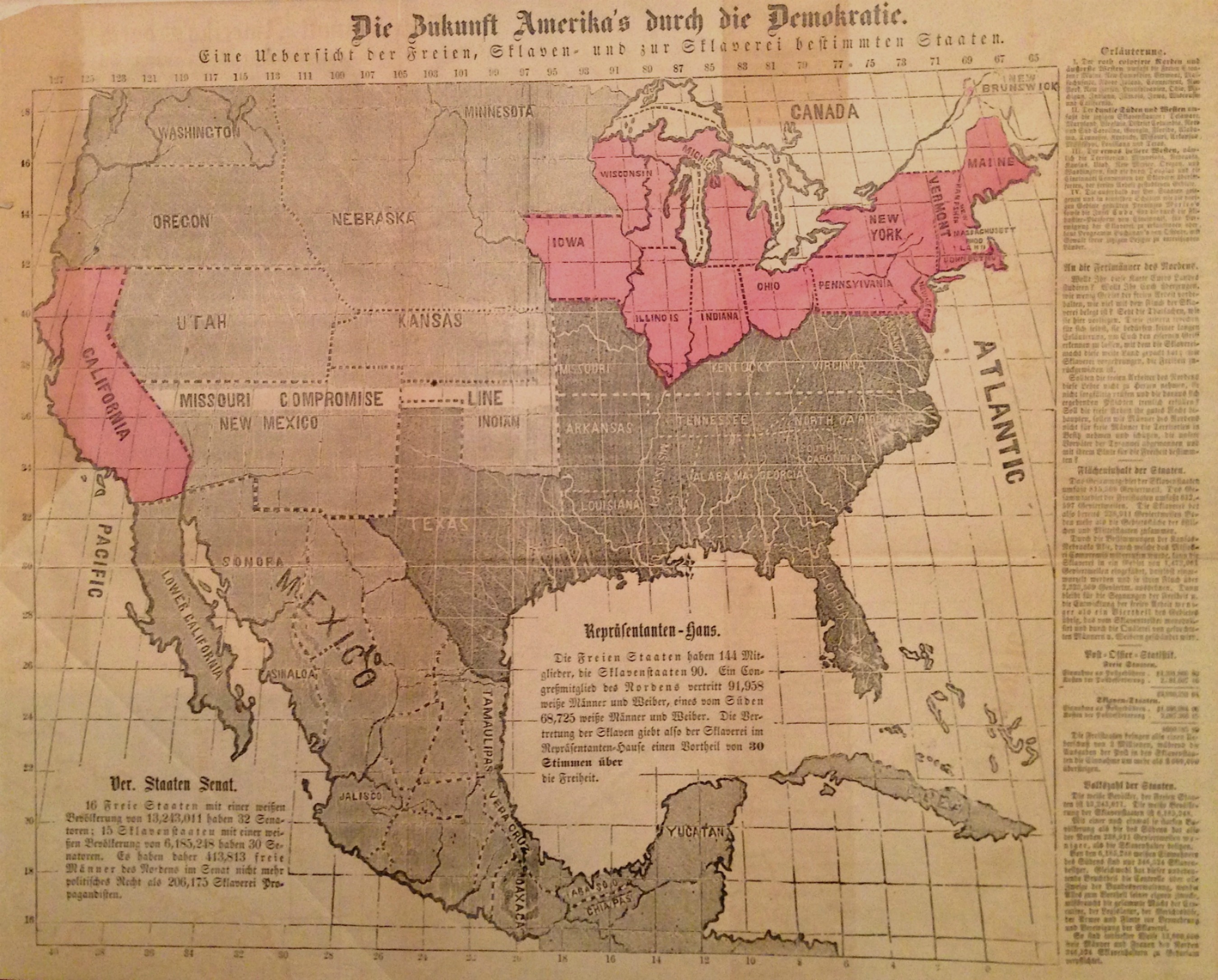 This was just one of several anti-slavery maps printed during the campaign, all of which pointed to the grave consequences of the Kansas-Nebraska Act of 1854. I have written extensively about these maps in chapter 4 of Mapping the Nation, as well as here on this blog. But I have never seen evidence of this campaign against slavery and the Kansas-Nebraska Act printed in a language other than English!

In this case, the Republicans were appealing to the large population of German-speaking voters (and future voters), a group of new citizens that would have been overwhelmingly opposed to slavery even though they identified with the Democratic Party.

The title of the map roughly translates as “America’s Future Through Democracy–An Overview of the Free, Slaves, and Slavery for the States to be Determined.” In that respect it echoes many other of the maps from the same year used in the campaign, all of which drew attention to the status of slavery in the American west.

The content of the map and the pamphlet–like those in English–stresses the territorial threat posed by the Kansas-Nebraska Act, which effectively opened the possibility of slavery in the American interior. The map audaciously blackens the west–and even Mexico!–to heighten northern fears of a future dominated by slaveholders.

It seems likely that the map was adapted from one of many English language editions circulating during the campaign. Its outline of the U.S. closely mimics another anti-slavery map made to endorse the Republican candidate, which is located in the collection of Barry MacLean and which I wrote about here late last year. 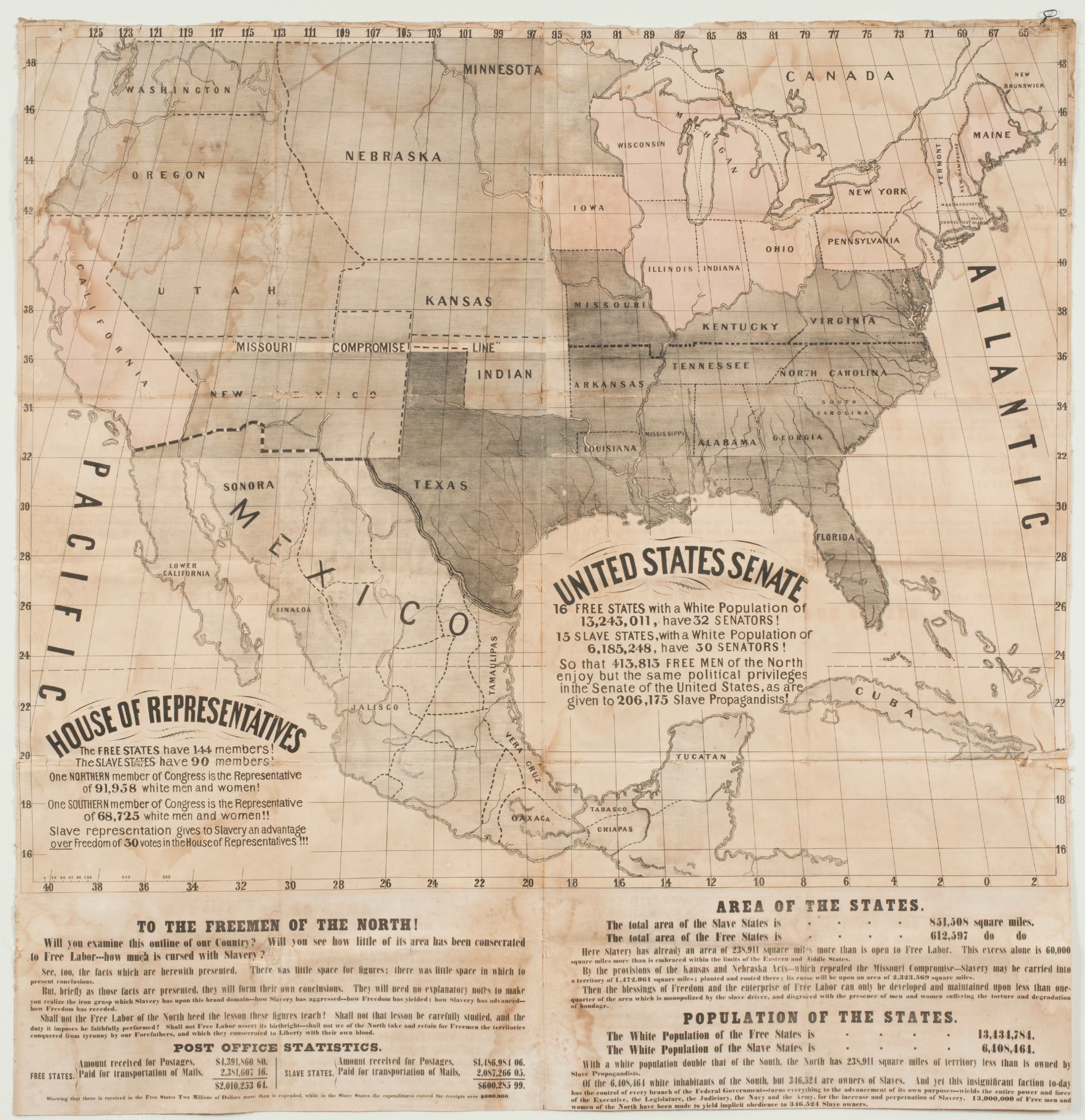 In fact the similarities extend to the text around the map as well. The urgent call “To the Freemen of the North” on the right side of the German map is nearly the same as that found on the MacLean collection map in English. Here is a rough translation of the German text:

“Will you study this map of your country? Will it convince you how little area is reserved for free labor, how much is occupied by the curse of slavery? Look at the facts as they appear here. These pictures speak for themselves. You do not need a long explanation to understand the power of slavery to seize this vast country, and where slavery has advanced, freedom has fallen back. . . .”

Notice that this is essentially the same wording as that on the English-language map, seen in the lower left corner of the crop below. 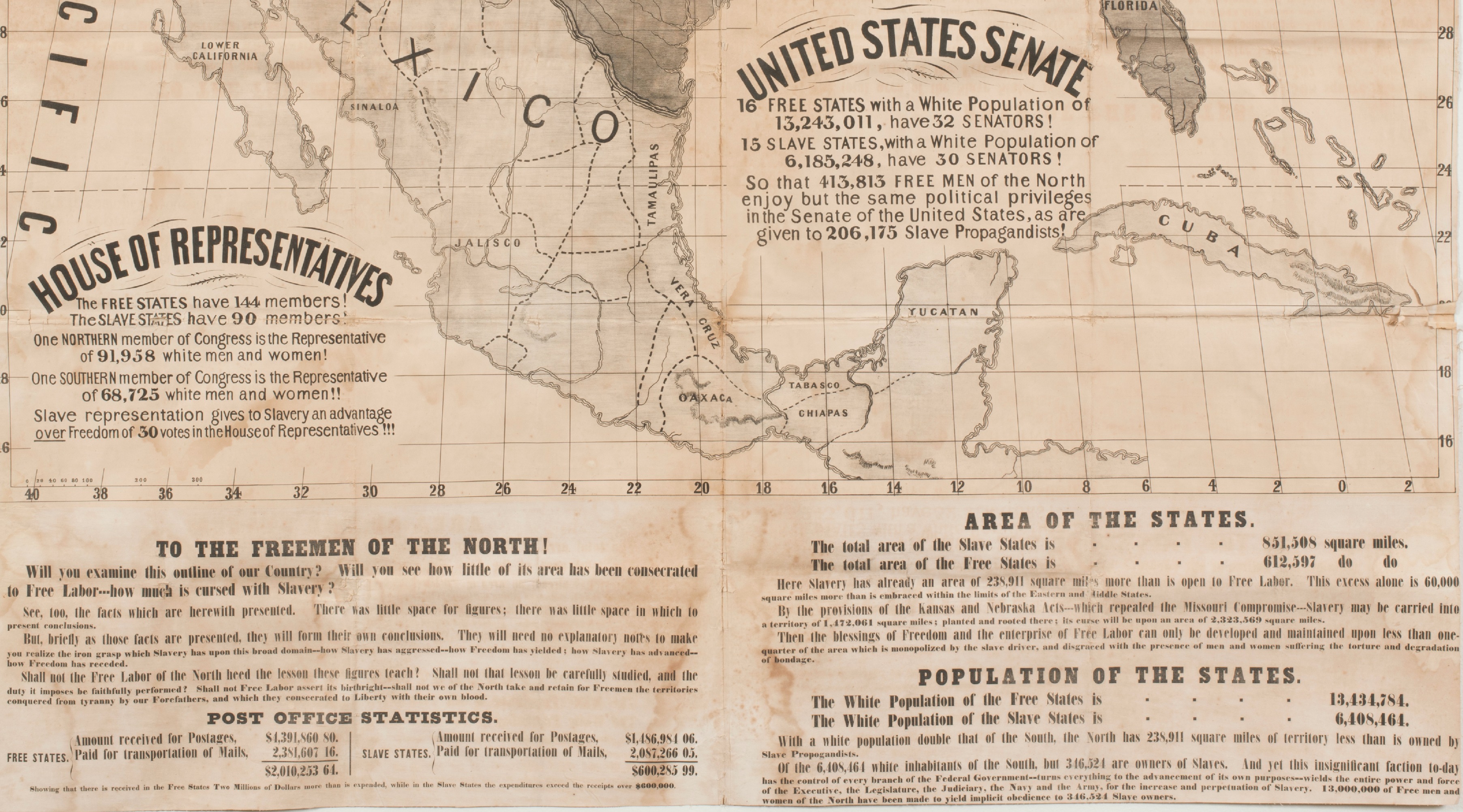 The existence of a German-language edition of the map (and pamphlet suggests the lengths that the Republican Party went to in its first national campaign. The Republicans reached out across linguistic, ethnic, and partisan lines in the hope of galvanizing opposition to the Democratic Party, and more importantly, generating enough support to challenge the Kansas-Nebraska Act. 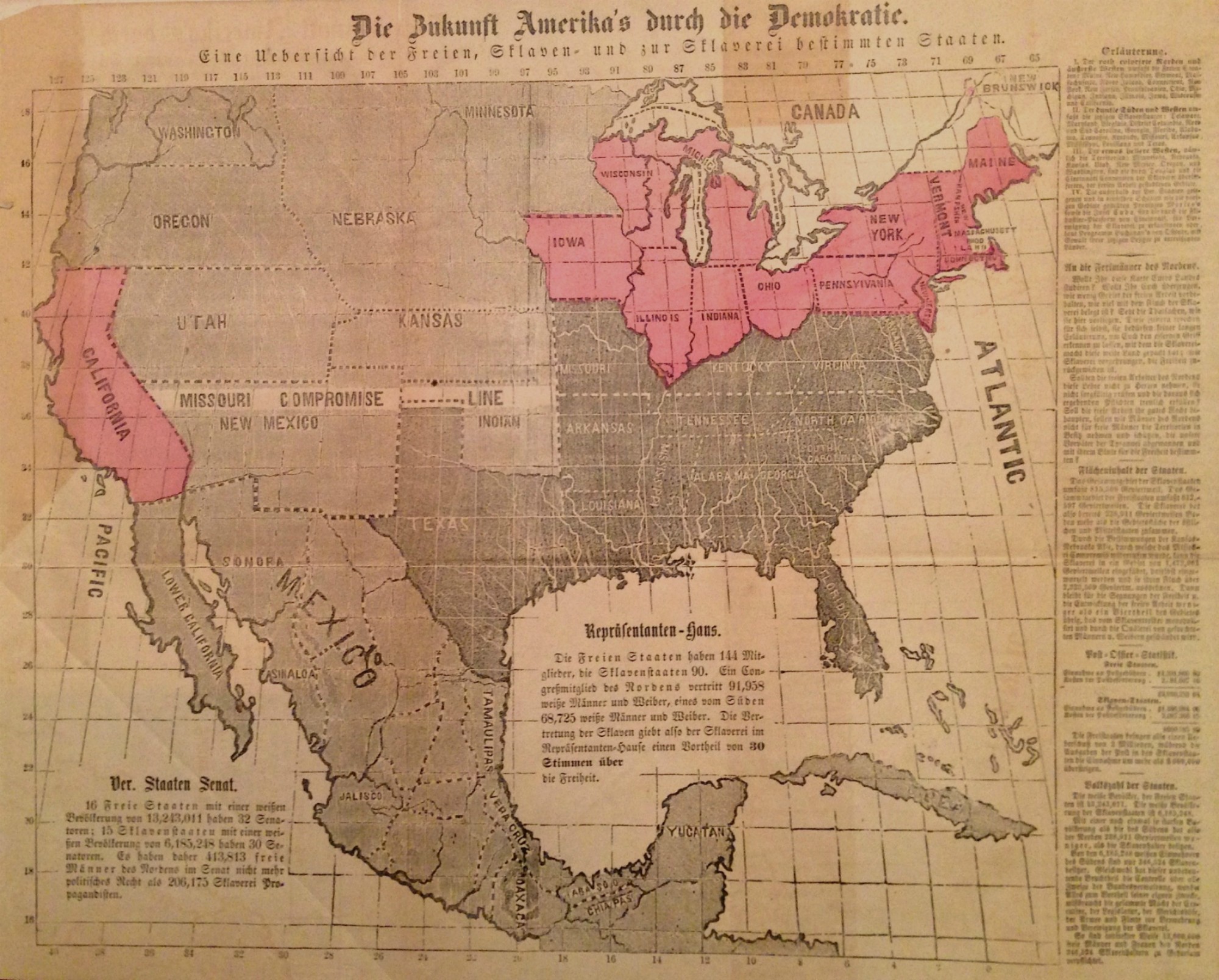