On December 22, 1864–150 years ago this week–Sherman telegraphed President Lincoln a brief but powerful message, “I beg to present you as a Christmas gift the City of Savannah.” Sherman had cut loose from his chain of supply several weeks earlier, in one of the most audacious and successful campaigns of the war.

Much has been written about that very controversial march through Georgia. Here I only want to draw attention to one of the many maps that Sherman relied upon. As I have written elsewhere, Sherman had an invaluable asset in Captain William Merrill, chief topographer of the Army of the Cumberland. By summer 1864 Merrill had built a superb team who developed a high level of Union intelligence through fieldwork. Their maps, in short, were first rate, and demystified the topography for Sherman’s battle to Atlanta.

But Sherman depended not just on topographic and railroad maps, but also data regarding the human and material conditions that he would confront in Georgia. He famously studied the 1860 Census in order to figure out where his troops might best forage and survive while they lived off the land between Atlanta and Savannah. In fact, at the outset of the war Sherman had asked the Superintendent of the Census, Joseph Kennedy, whether the latter might develop maps that represented not just the topography, but its people and resources. Kennedy had been thinking along the same lines, perhaps inspired by the maps of the Coast Survey that represented slavery.

Yet although such data might seem relevant in the abstract, it was not yet presented in a way that could be readily directed toward military use. The census had long been compiled into enormous volumes of endless tables, but not yet visualized. Kennedy responded to Sherman’s request by quickly adapting a series of oversized southern maps that might allow him to put that census data into cartographic form. Of this series, the map of Georgia was most relevant for Sherman, identifying rivers, roads, and railroads but also the location of the population, crops, and livestock. 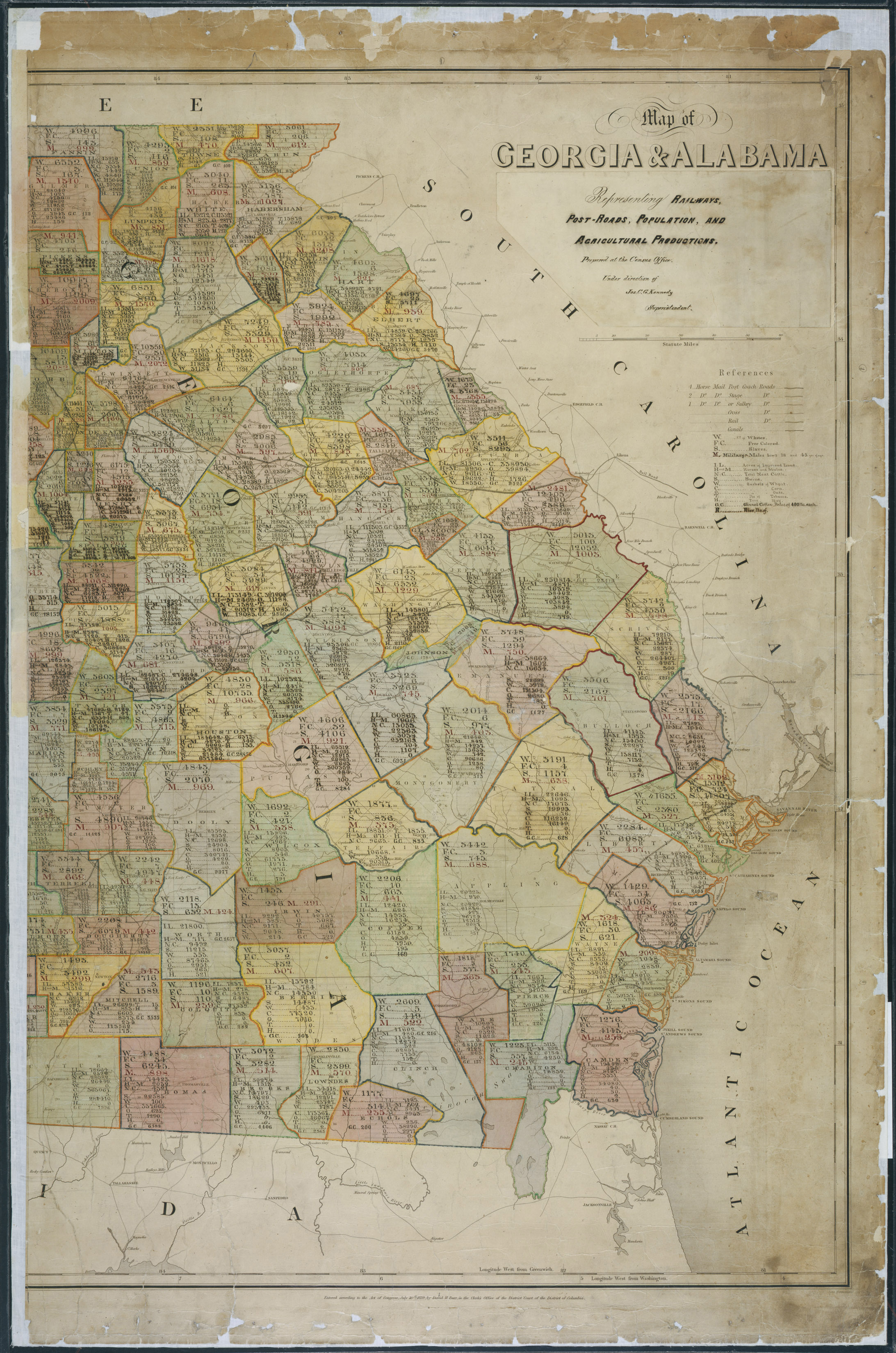 Kennedy adapted an existing map of Georgia and Alabama that had been made 25 years earlier as part of a well-known postal atlas of 1839 (this map covered both Georgia and Alabama; the western half has been separated and lost). The maps covered one inch to ten miles and measured 39 inches tall and 26 wide; originally they marked very little beyond transportation networks, which was ideal because it allowed him to add the many new counties, roads, and railroads that had been added since 1839. Kennedy then annotated each of Georgia’s counties with the latest information about population, agricultural, and livestock that Sherman would need. 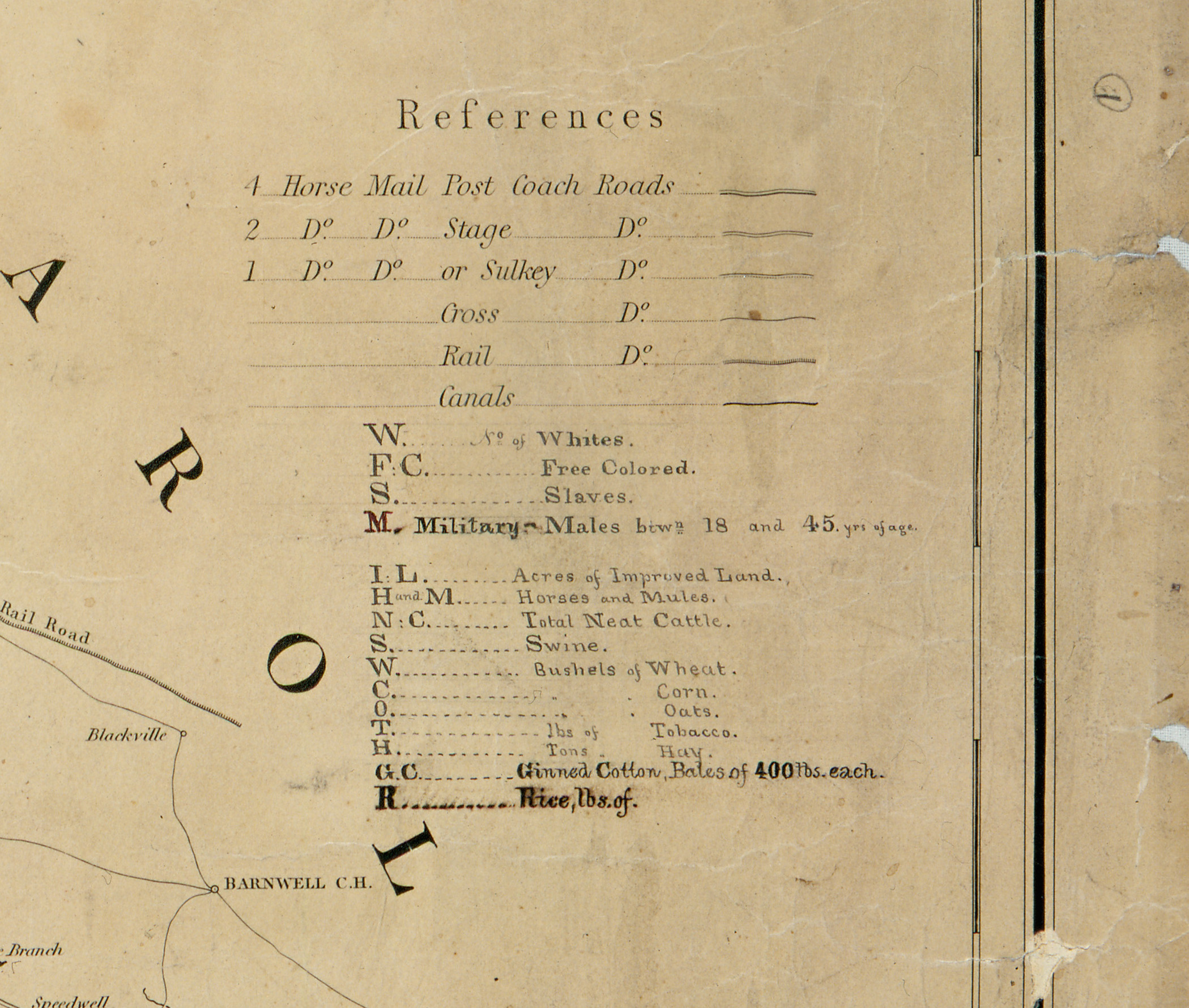 In each of the counties, the population data is listed first: whites, free coloreds, slaves, and men of military age. The figures in that last category reflect men up to the age of 45, which indicates that the map was made after September 1862, when the Confederacy raised the age of conscription to 45. At first glance it might seem puzzling why Kennedy would list men of military age, who presumably would have been in the Confederate army and therefore not present. Most likely, he included this figure so Sherman could adjust the total white population downward to reflect their absence, and thereby roughly anticipate the civilian population he would encounter. 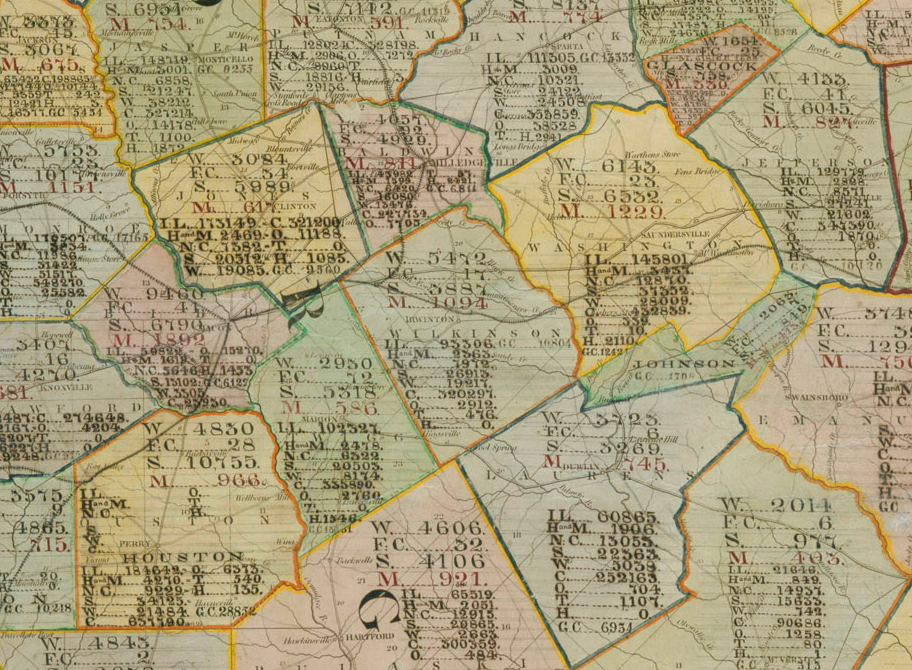 Notice too the care given to identify the slave population. However much we credit Sherman for destroying Confederate resolve in this campaign, he also made war on the food supply for all Southerners, and in burning not just cotton but corn, he created hardship for those with the least power to survive. Sherman’s armies encountered approximately 90,000 slaves in their march to the southeast—which constituted 52% of the population of those counties. Fourteen thousand of those newly freed men, women, and children attached themselves to his army, and no wonder: no better fate awaited them in its wake.

Even more important is the information identifying the improved land, livestock, and crops. Sugar and ginned cotton could be profitably burned to cripple local livelihoods, while livestock could be culled and corn could be eaten by his hungry men. Military historians have emphasized this intelligence as central to the Union army’s ability to continually move toward Savannah and decimate Confederate resolve. 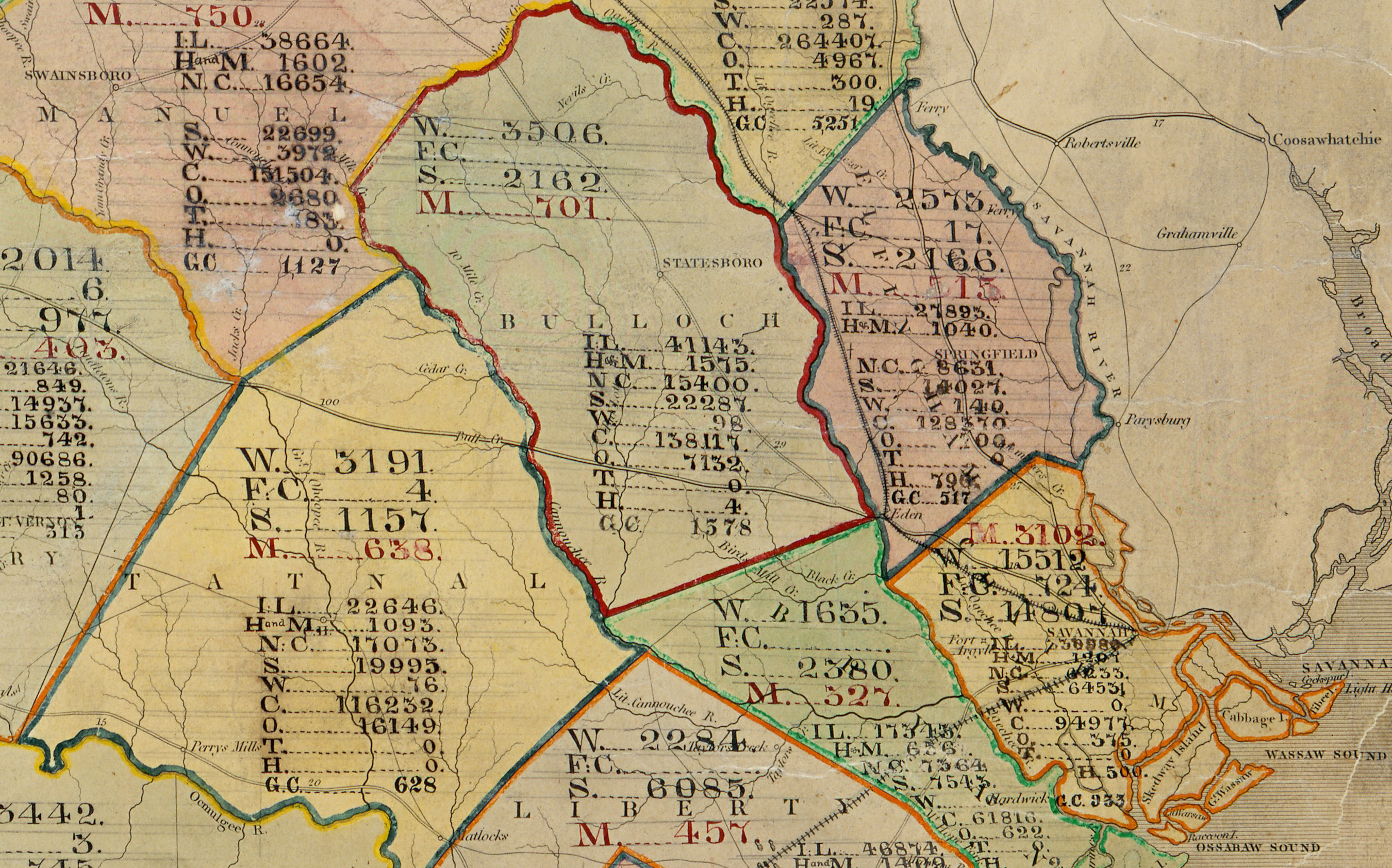 It is hard to imagine that a crude map such as this would have been as useful to Sherman as the elaborate, meticulously drawn topographic maps produced by Merrill and his men. The logic of the march was probably governed as much by terrain and rail routes as the presence of swine and corn. But the importance of this map is not just its role in the field, but in Sherman’s decision to conceive and undertake the operation in the first place.

Immediately after the war, Sherman made this very point. In an open letter to Congress he testified that the data maps had helped his armies to identify supply routes, “which otherwise would have been subjected to blind chance, and it may be to utter failure.” These maps of information allowed his men to cut loose from their chains of supply, for they knew where to find cultivated lands, grain, and animals. As he put it bluntly, “I knew exactly where to look for food.”

Most important was Sherman’s final observation: without this intelligence “I would not have undertaken what was done and what seemed a puzzle to the wisest and most experienced soldiers of the world.” In other words, the census data gave him the ability “to act with a confidence that insured success.” Hindsight? Surely. But it gives us a glimpse into the mental calculation that, ultimately, brought such destruction to an end.

Thanks to the New York Times’ “Disunion” series, where portions of this essay first appeared.