In late October I gave a talk at Syracuse University, and was honored to have Donald Meinig in the audience. Meinig’s four-volume The Shaping of America (Yale) is written from a geographical perspective, and provides a rich context and complement to more traditional political histories. One particularly useful insight is Meinig’s “might have been” maps of the nation. I was struck by the “lesser” United States, which is disturbingly unfamiliar but not at all implausible. 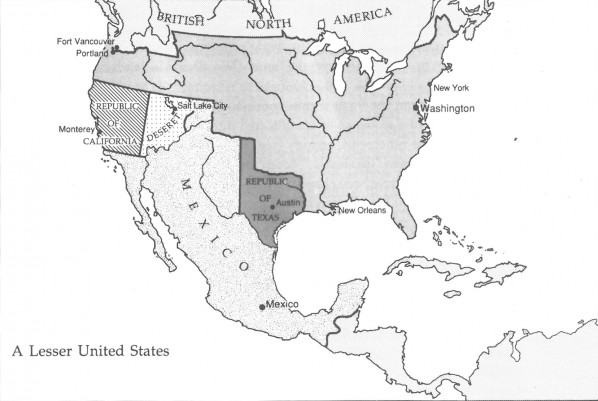 Such a geographic reality is not difficult to imagine. In the 1830s, there was not yet a dominant sense of Manifest Destiny. The independence of Texas in 1836 was achieved by a fragile alliance of Anglo and Mexican Tejanos, and came without aid from the United States. In fact, after independence, overtures by the Texas Republic to be annexed by the U.S. were rejected by Presidents Jackson, van Buren, Harrison, and initially by Tyler. The prospect of adding new territory in the west, which would fall under the Missouri Compromise Line and therefore be open to slavery, would upset the delicate balance between free and slave states.

By the 1840s, expansionist sentiment had grown considerably, and was directed not just Texas but also the northwest. President Tyler had avoided the issue of annexation, but in the election of 1844, Democratic candidate James Polk ran on an ardently expansionist platform, and insisted that the west was crucial to the nation’s growth. His Whig opponent, Henry Clay, opposed annexation, in part because Mexico had made clear this would be considered an act of war. Clay did poorly in the south, where expansion to Texas was popular, while in the north he was narrowly defeated by a Democratic party that recruited urban ethnic voters on issues unrelated to Texas.

Clay lost to Polk by only 30,000 votes, which suggests that there was limited support for annexation (in fact it was primarily rooted in the south). Yet President Tyler interpreted Polk’s victory as a mandate for expansion, which prompted him to push through annexation as one of his final acts, with help from expansionists in Congress. If Clay had won the election, Tyler would not have annexed Texas, and the United States would not have entered into war with Mexico – at least not in 1845. Had Clay won, we might assume that the nation would have avoided annexation, and by extension war with Mexico.

There was deep resistance to the Mexican War in the northeast, and concern by many that it was foisted upon the nation by expansionist southerners hungry for new territory. In other words, many Americans did not necessarily link national progress with geographic expansion. So it’s possible to conceive of a lesser America by positing the absence of the Mexican War. Along these lines, we could imagine an independent Mormon state of Deseret, and even a California that remained part of Mexico or gained its own independence after the gold rush.

It is of course just as easy to imagine a more aggressively expansionist nation, which might have turned out something like this: 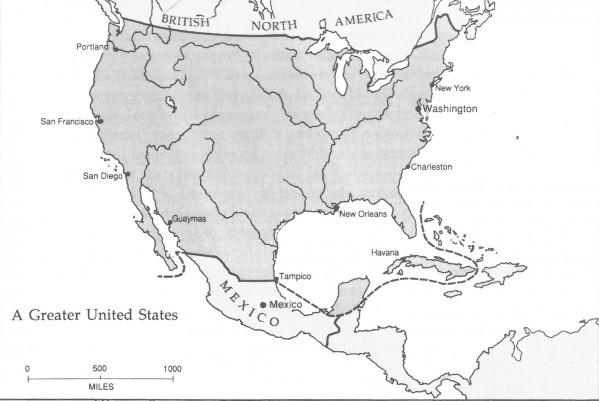 I recognize the limitations and dangers of counter factual history (and if this is what qualifies as danger in your world, please consider becoming a historian). Such an alternative history doesn’t prove anything, but it does disrupt our assumptions about national geography. It’s also important because maps have the power to erase contingency. The repetition of the continental outline maps of the United States tends to give the nation an immutable and natural quality. Meinig’s “greater” and “lesser” America remind us that history could easily have turned out very differently from what we assume to be national destiny. 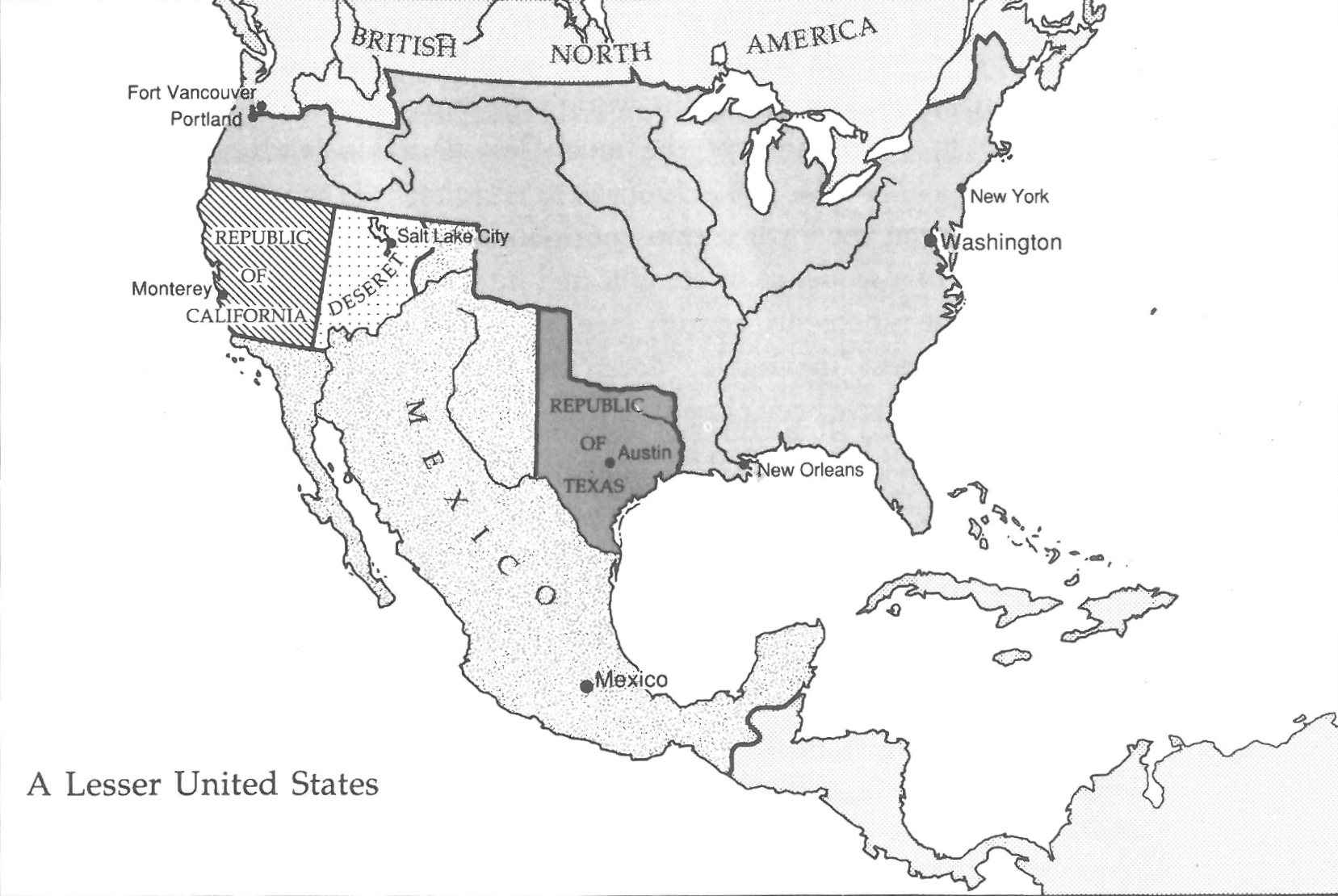 One Response to “An unrecognizable United States”