An imaginary map of temperance

In the archives of the American Antiquarian Society lies a strange and captivating map with an even more unlikely story. The map dates to 1838, though this copy was printed five years later. At first glance it looks as if it depicts a physical place, with islands and topography rendered with care. Closer inspection, however, reveals that this map records not an actual location. Instead, it’s an allegory of temperance, framed as a journey through our animal appetites. Originally drawn by a temperance activist from the Northeast identified only as “C. Wiltberger” (John Christian Wiltberger, an American missionary to Liberia), the map had a highly unusual afterlife when the engraved plate sailed half way around the world to a small school run by missionaries on the island of Maui. The map asks each one of us: are you on the road to salvation or damnation?

The map’s second life was courtesy of Lorrin Andrews, a Connecticut carpenter turned missionary. Andrews was among the first generation sent to the Hawaiian Islands in the 1820s, and along with his Christian convictions he brought a determination to educate the young men of the island through a school built near Lahaina in 1831 (one could certainly imagine rougher assignments!).

Andrews’ mission work was in some ways a story of cultural imperialism, a Christian missionary exporting ideals of self-control and comportment to a benighted society. But there were twists, not least of which is that he and his fellow missionaries were the first to codify and print the phonetic alphabet for the Hawaiian language. They did this by bringing several hand presses to the islands, which by 1838 had printed 100 million pages of text in Hawaiian and nearly as many in English (including the first Hawaiian newspaper and the first English language newspaper west of the Rocky Mountains).

Andrews was also uncommon in insisting that his students—mostly grown men with families—learn to make maps, which he considered as essential to literacy as learning to read and write. This was especially true for Pacific Islanders, he believed, given how distant their lives were from the rest of the world. Andrews’ passion for map-making was made more unlikely given that this was the era before lithography, so most maps were made through the arduous, highly artistic process of engraving. Simply put, it was time consuming, and not the most immediately useful skill. But Andrews’ students were game, and over the course of the 1830s they printed hundreds of copies of at least 83 maps spanning every continent, as well as numerous charts, tables, and landscape views of life on Hawaii. Andrews soon found himself facing a strong demand for his students’ engravings, particularly the many maps that were bound into the first school atlases used on the islands. When his church balked at his requests for materials to meet the demand, he left the mission and made his own way on the island as an independent pastor.

One of the most unusual of the prints made by Andrews and his students was the imaginative “map” of temperance, which Andrews engraved with the help of one of his most skilled apprentices, Kepo Honi. It was as much a commercial venture as a moral act: Andrews hoped the map would have wide appeal, and even had his students design a second version with place names in Hawaiian rather than English.

The map begins on the left, where readers one must navigate the first of several challenges on their way to salvation. It stresses that the greatest threat to temperance was the myth of moderation, and the gateway to drunkenness is comprised of an archipelago of “temperate use” in its many forms, from the pressure of “social feeling” to the age-old quackery that beer would improve mother’s milk. 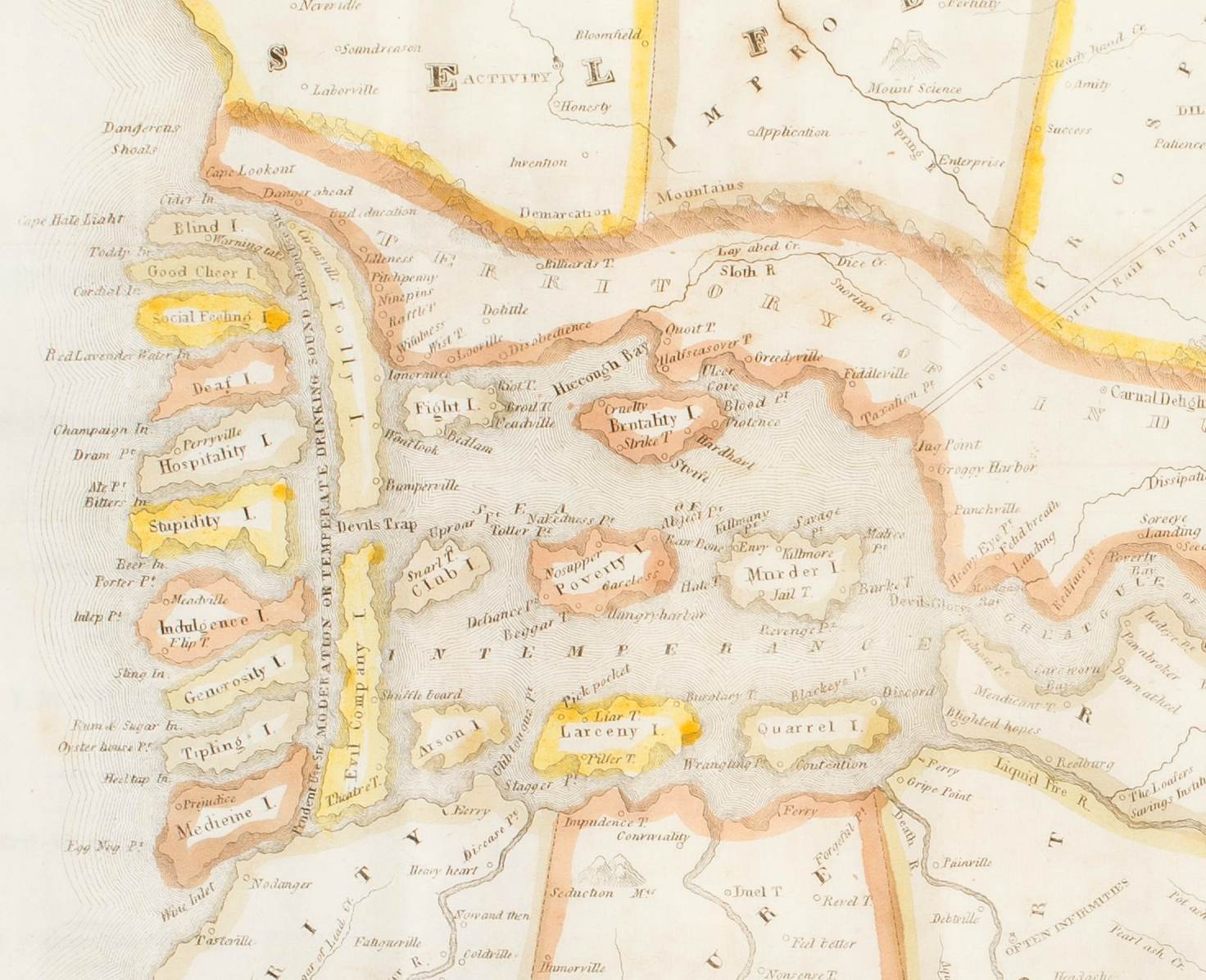 Past the straits of moderation, things get really dicey, for as you navigate the Sea of Intemperance you risk running aground on Murder and Poverty Islands. Notice how easy it is to slip south by river into the “states of inebriation”–including False Security and False Pleasure–before floating adrift in Wine or Beer Lake. 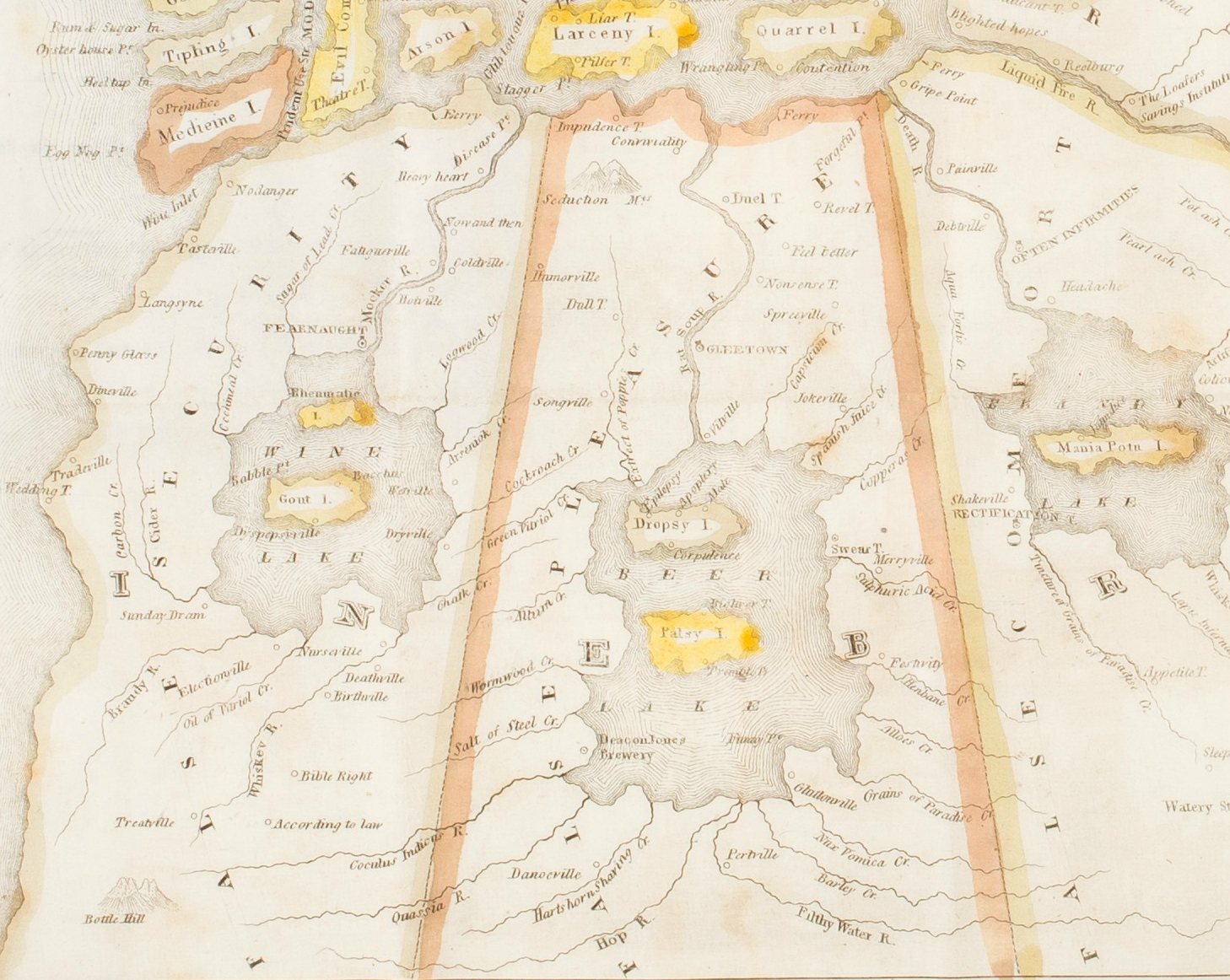 Indeed, the only hope once you’ve entered the Great Gulf of Wretchedness is to steer yourself into the narrow Straits of Total Abstinence until you reach the Sea of Temperance, where you can take residence on Good Repute Island. Careful, though, lest you be sucked into Relapse Bay, slosh through the Gulf of Broken Pledges, and into the Sea of Anguish or Bay of Remorse.

The map is jammed with prurient detail. Think of the effort that went into designing this imaginary topography, with Seduction Mountain and Agony Island enticing readers as they traverse their moral landscape. By creating a map—rather than yet another sermon or tract—Wiltberger and Andrews expressed the ubiquity of temptation. The map has an internal logic of its own, where each turn leads directly to clear consequences. The noble path of teetotaling required vigilance and strength at every turn.

The Temperance Map is part of a much longer tradition of allegorical mapping that stretches back at least to the fifteenth century, when a slew of maps followed Dante’s Divine Comedy. Well into the nineteenth century, maps of love and courtship popularized ideals of propriety. At bottom, all maps are persuasive in some regard, and the geographical metaphor is especially suited to impress upon the reader the manifest ways a life can go off course. By the late nineteenth century, temperance advocates galvanized support for prohibition through elaborate, more empirical maps that identified the many distilleries and saloons of London, Chicago, and New York City. In the map that Andrews’ printed, sin itself was given a terrestrial form, something that could be visualized and thereby avoided.

As its author urgently put it: “THERE IS DANGER AHEAD!!!”

Map courtesy of the American Antiquarian Society. Thanks to Charlie McCrary for his help in tracing the identity of John Christian Wiltberger.